Wednesday I did a small boat transfer onto the support vessel 'Maria G' for a 24 hour steam to Paramaribo, Surinam. A chance to catch some well needed sleep and do a bit of leisurely sea watching!

This is one of the few remaining great shearwaters in the area- I suppose this individual is waiting for  it's new feathers before playing catch-up with the rest of them off Greenland. I really like the effect of moulting in these birds with every feather so clearly defined......

A few hours into the transit we were lucky to have a visit from 4 spinner dolphins that took some delight in bow riding for 20 minutes or so..... 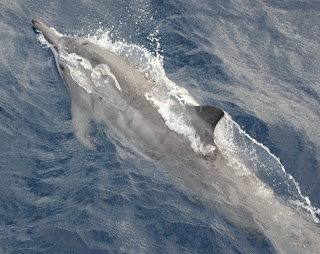 The following morning we entered the river system for the final 2 hour journey up to Paramaribo. A chance to see trees at last! I is quite strange how much I miss the colour green after 5 weeks at sea. Plenty of birds about too, with raptors, terns, frigate birds and a variety of herons all showing nicely over the river. We also saw the Tucuxi river dolphins again although they were rather distant. Although not exactly attractive the birds the frigates were certainly magnificent! 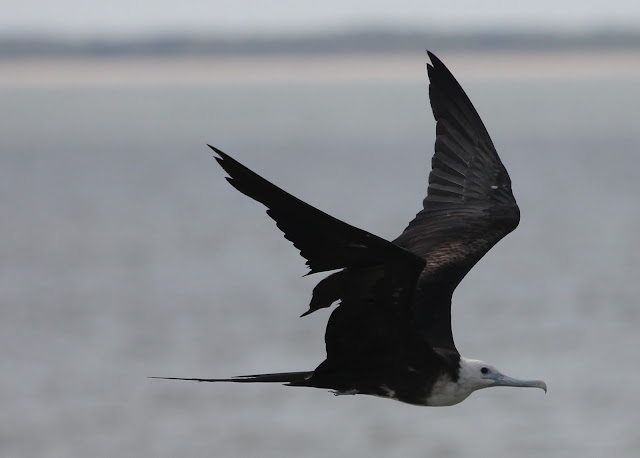 Quite a bit of fishing activity too- both of the inshore subsistence type and larger vessels working offshore and commercial traffic utilising the high tide to get in and out of Paramaribo.

After over a month at sea the air and vegetation seemed full of birds- mostly distant but still a delight to see...just wish I could name them all! 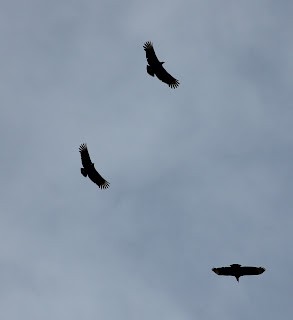 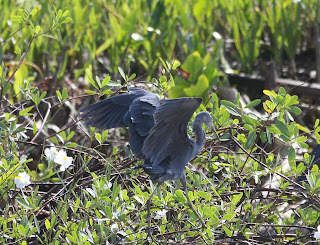 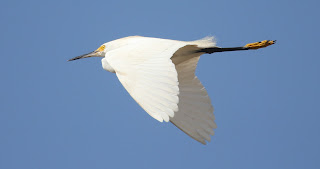 later after a hotel rest stop, I headed for the airport for the 10 hour flight to Amsterdam, then on to Aberdeen before finally arriving home in Ullapool after travelling for three and a half days. Beer and local patch time time!

Posted by Andy Williams at 19:20 No comments: Links to this post

Generally things have quietened down some what. With noon temperatures hovering around 34 celsius in the shade, being on deck is hard going when there is little to see. We seem to be surveying in an area with little marine life- the occasional flying fish, a brief glimpse of a distant great shearwater and the occasional bonus bird. Yesterday we had a very brief encounter with a nice adult brown booby- the bird kept its' distance and the light was not the best but it brightened up an otherwise dull day!

A couple of dorado have also been seen around the bow of the vessel, ambushing the flying fish whenever the opportunity arises.

Today was rather busier, with sooty terns, a lingering great shearwater, several leach's storm petrels, a pod of 16 sperm whales and a distant group of dolphins. I managed slightly better shots of the leach's storm petrels but admit to finding them very frustrating as they are shy of the ship and difficult to capture as they flit and bound over the waves and swell!

Posted by Andy Williams at 01:00 No comments: Links to this post

Everything is in a hurry these days! A few false killer whales went racing across the bow of the ship- a difficult species to observe as they torpedoed through the water throwing up intense, brief splashes as they chased the small surface feeding fish. Fantastic animals though and very good at remaining out of view considering they can approach 6 metres in length! I managed a couple of very poor, distant shots that show the classic surface profile and characteristic dorsal fin.

The arrival of a swift sp. was also an interesting sight as the bird wheeled around the ship- a new species for me in this part of the world and one of only a handful of non-seabirds seen this far offshore.

﻿ A nice little flock of 5 pomarine skuas put on a show for 10 minutes or so as they initially harassed a great shearwater and then decided to chase the swarms of flying fish flushed from the sea by our bow wave. Nice to see so much plumage variation on these birds!

A nice end to the day was seeing a school of surface feeding tuna as they chased the small bait fish- an even better sight when a few sooty terns joined in the feast.

﻿
FOOTNOTE 26.06.2013 Following subsequent scrutiny of my blog and the initial dodgy swift ID (initially thought to be a white-chinned swift) it comes to light that the bird could well be a common swift, apus apus........this could be really exciting as not only could it be a first for Suriname but quite possibly a first for south America!!


Posted by Andy Williams at 23:56 No comments: Links to this post

Starting to notice a slow 'seasonal' change now, with great shearwater numbers dropping off on a daily basis, as the birds continue north for Canadian and Greenlandic waters. Cory's remain rather scarce too with just the occasional bird seen every 2-3 days. Aside from that it has been a hectic few days on the marine fauna front with Spinner and pan-tropical spotted dolphins seen- albeit, rather distantly.

I spent some time trying to get decent shots of Leach's storm petrels too, but these birds have been exceedingly difficult to capture- small, distant, flighty little things- and usually against the sunlight!!

I had some success with the skipjack tuna that are constantly hanging around the bow of the vessel and occasional undertake an ambush of the juvenile flying fish.


Highlight of the last day or two though has been a lovely adult masked booby- unfortunately very late in poor evening light!

Posted by Andy Williams at 00:11 No comments: Links to this post

We crossed paths with a blue fishing boat- a longliner, a few days ago. She was about 28 metres overall length and believed to be of Brazilian origin. Not sure how she gets away with fishing in Surinamese waters- maybe Suriname does not have fisheries patrol vessels or a navy? Anyway, during daylight observations she was seen distantly-hauling in  surface long lines, presumably set the previous day/night for tuna and tuna- like fish species. Then she was gone- no visual contact, no radar contact. Then the woe started- a bird corpse floating on the sea surface- on its' back, the stomach bloated by the expanding gases, gleaming white in the tropical sun. I was pretty sure it was a great shearwater. Then I spotted another 30 minutes later, followed by two birds a short while later- all dark brown/white, belly-up individuals. Shearwaters are not so attractive when viewed this way.

This has gone on for a few days now with at least 40 corpses observed- some of the bodies more waterlogged and broken by wave action than others, some partially eaten by fish. Of course, rather worryingly this is the tip of the proverbial iceberg as I am only seeing the corpses of birds that lie fairly close to the survey path of my own vessel. Just how many dead seabirds are out there is anyones' guess! Of course I could not prove that the corpses were linked to long-line fishing but I did manage a poor shot of a great shearwater attached to a long-line snood- the relatively thin line that connects the baited hook to the main strain-bearing long line. Rather a sad moment to see this lovely seabird hooked or tangled in a length of fishing line and struggling to fly across the sea with little of its' usual grace and beauty. Presumably without its' usual ability to fly and forage it will suffer a lingering death as opposed to one of drowning relatively quickly thanks to the line breaking free- I really can't say which is worse. Not one of my better days at sea. :(

Posted by Andy Williams at 00:53 No comments: Links to this post

Even shyer than the Cory's shearwaters, these charming birds have proven very difficult to capture and the intense tropical sunlight reflecting off the water has been challenging my very limited photographic abilities. These shots will do for now though and the sunset was pretty spectacular too! 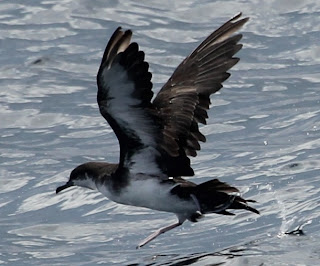 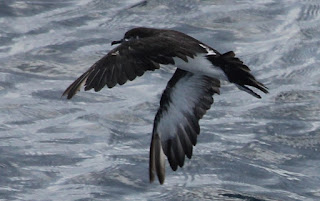 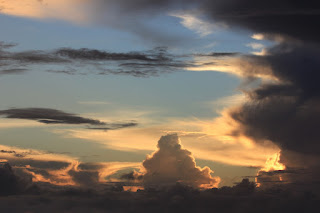 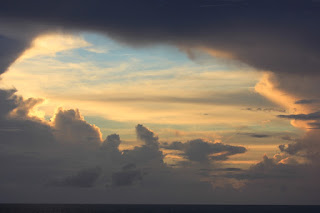 Posted by Andy Williams at 00:54 No comments: Links to this post

Very difficult birds to photograph due to the harsh sunlight and the shy nature of this species- they rarely do a close pass!


Posted by Andy Williams at 21:06 No comments: Links to this post